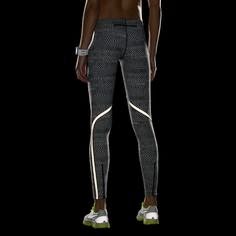 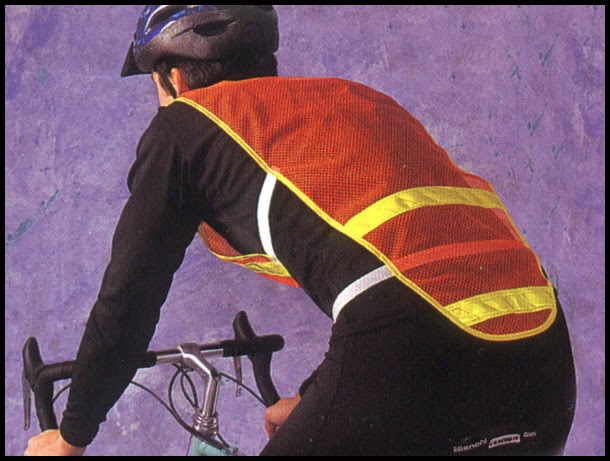 Safety apparel has always been less than flattering, and whats worse is there isn't an alternative available. In our initial research of the market, we visited almost every on-line bike shop in Canada and couldn't find anyone selling reflective shirts. Sure we found a few jackets and bags that had minimal reflective trim but for the most part the choices were pretty grim. Your options are looking like a street pylon or my favourite, airport ground crew or squeezing into ridiculously tight spandex you can barely breath in, I mean you might as well be wearing Spanx!
So we sacrifice our safety in fear of being seen in those hideous reflective vests, but nighttime visibility is one of the main reasons for motor vehicle and cyclist collisions. That's why we feel its so important to BE SEEN at night and any additional visibility  above the law required front white light and awful plastic rear red reflector, will help to increase your safety when riding at night.

REFLX Reflective Apparel, is safety wear for urban commuters.  Whether you cycle, ride or run, our line is designed to provide 360° visibility so that you can BE SEEN at night. We ensure the highest level of reflectivity in all our products by only using 3M™ Scotchlite™ Reflective Material who pioneered Retroreflection technology over 50 years ago.

Retroreflection occurs when incoming light beams bend as they pass through the front surface of each glass bead and reflects off a mirrored surface behind the bead back towards the light source. That's why Retroreflective materials appear brightest to drivers who are located near the car headlights.

Here are a few examples of our designs.

Each design follows the human form by placing 3M reflective material on the font back and arms proving 360° visibility.

Women's T-shirts are 95% cotton and 5% Lycra for that
comfortable fitted look.

Mens Hoodie is a 14oz premium cotton fleece made from 75% cotton and 25% polyester.


Theres a trend happening in Toronto and in other major cities across Canada, we're seeing a huge increase in the number of urban commuters. Long gone are the days when we only cycled on the weekends for recreation. With traffic getting worse, transit fares continuing to increase, and new bike lanes being added, cycling is becoming a commuting solution. Whether you're cycling from work, to the gym, grocery shopping or just out for a ride, nighttime visibility is a safety issue snd its not surprising considering the lack of options currently available to consumers.
Everybody wants to ride safe and BE SEEN and now you can with  REFLX Reflective Apparel.
Please visit www.reflx.ca for more innovative reflective designs and products.


My fist bike was a kids Raleigh BMX soon after I inherited my uncles custom BMX he built, it was a white GT Performer with white 5 star rims. When Mountain bikes became available in the 90's I bought myself a Wheeler Pro 2000, which I still ride today. Recently I built my own Single-gear commuter bike and plan to share my experience the good the bad and the ugly.
So before I begin I think its important to clarify the difference between a Fixed-gear and a Single-gear bike since I myself didn't realize there was.  A Fixed-gear drivetrain has the drive sprocket (or cog) threaded or bolted directly to the hub of the back wheel so that the rider cannot stop pedalling. Single-gear bicycles incorporate a freewheel to allow the pedals to remain stationary while the bicycle is in motion so that the rider can coast. I decided to stick with what I know and go with the single-gear option, but I also wanted to keep the feel of a Mountain bike since Road bikes ride very differently and its what I'm used to riding. 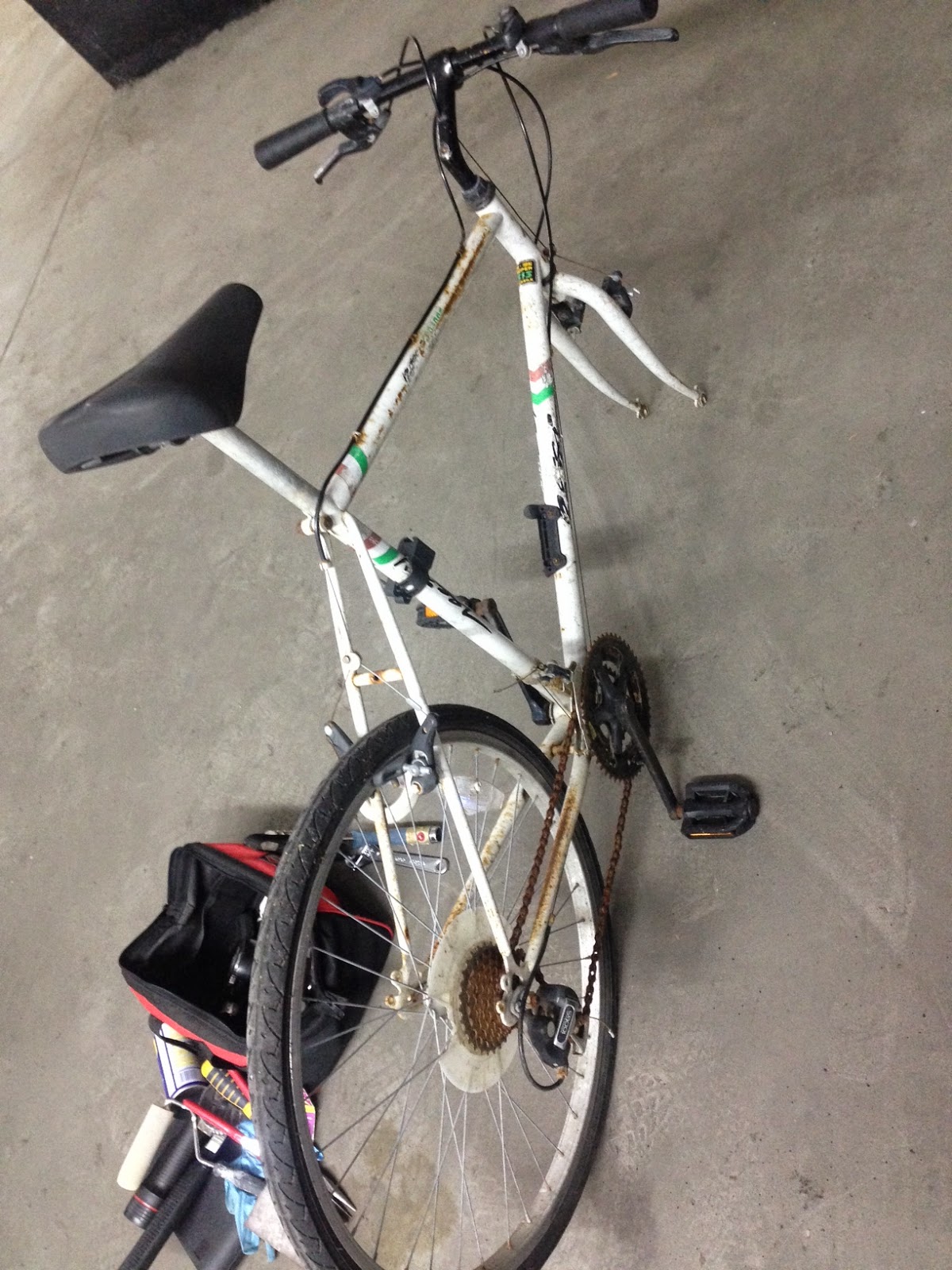 Around the same time I decided to get myself a single-gear I came across an abandon Rossi Mountain Bike. So I decided to see if I could convert it myself to a single speed mountain bike. Thats right, I said a Rossi Mountain Bike, most of you will recall Rossi for their Vintage Italian Road Bikes. However I'm not 100% sure its the company the craftsmanship in Rossi bikes (as seen below) was not evident in the bike I found. 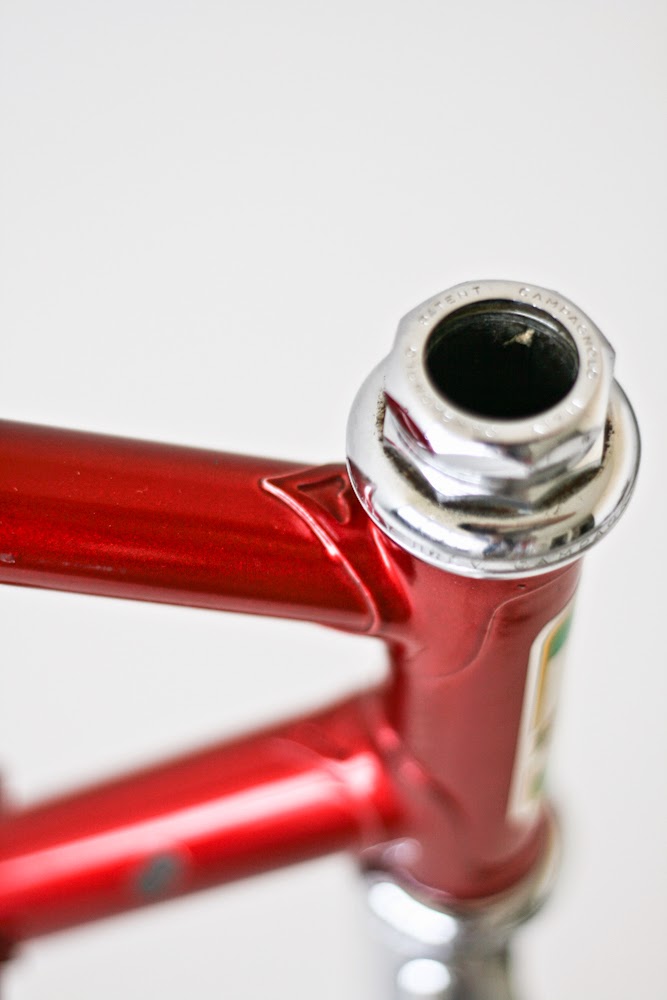 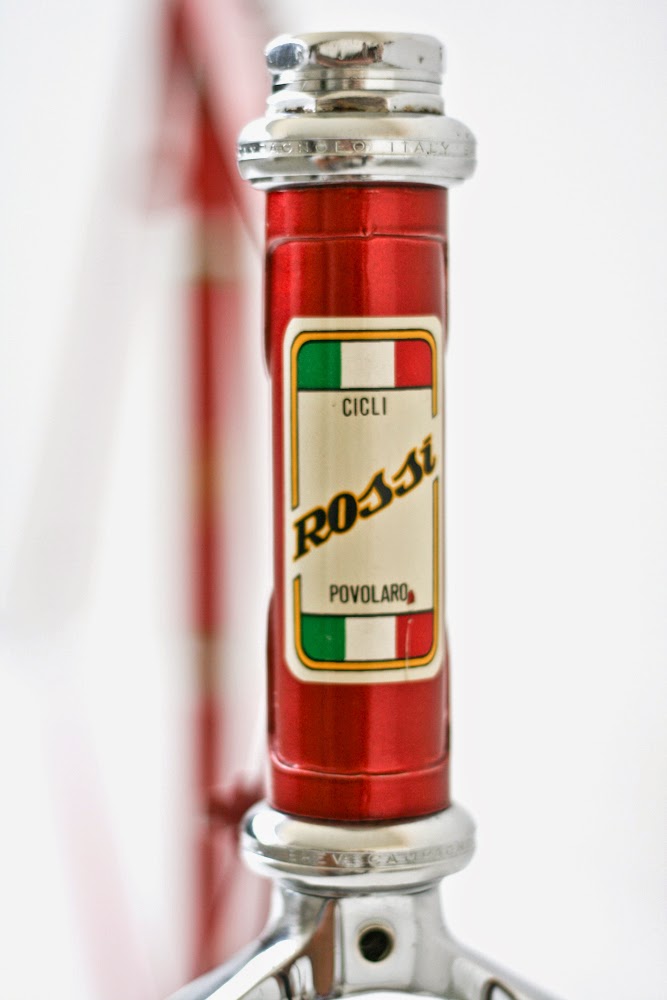 But oddly enough the Rossi logo/font is identical in both bikes as you can see below and the bike is sporting the green, white, and red strips representing the Italian flag. 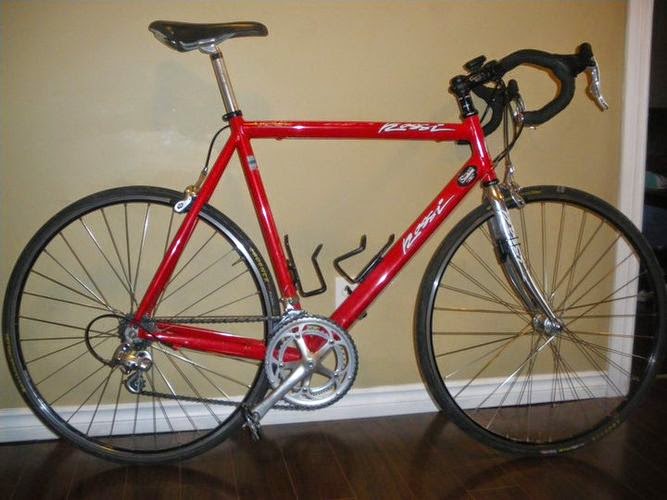 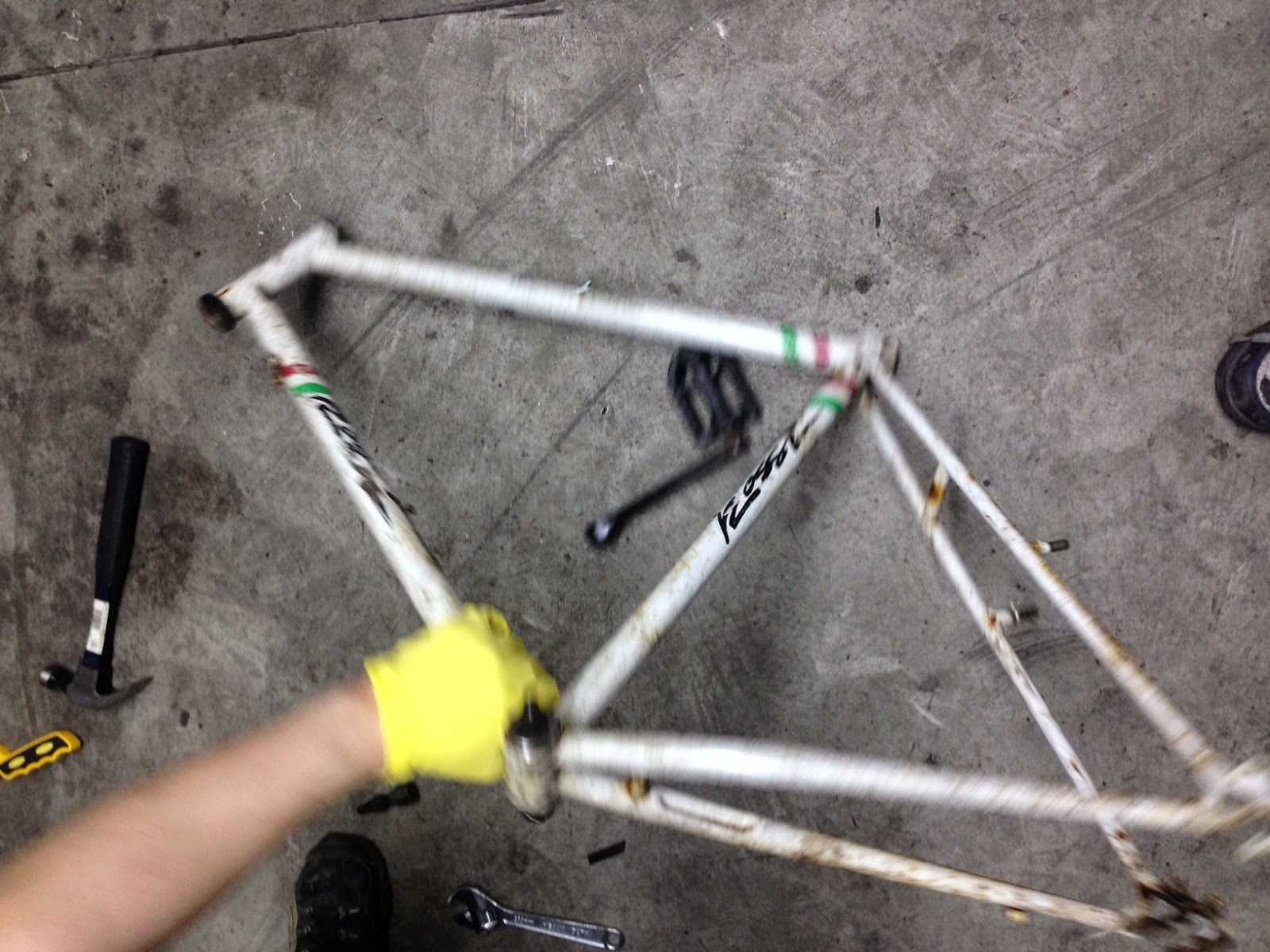 Now its time to take you through my experience of rebuilding my first bike, heres a few tips I learned to make the process a little easier and less stressful.
I found it easiest to start with removing the cables and housing, make sure to keep them to measure the new cables and housing, that need to be cut.  Grips, Breaks, Peddles etc. should be removed and replaced with new ones. Next you can remove the chain, you'll need a chain tool which can be bought for under $7 at Canadian Tire.
Then remove the headset, you can use the handle bars and tire for leverage, the remove the handle bars, front forks and tires.  Then it was time to remove the crank and bottom bracket but I had no idea how, so I turned to YouTube. I found these 2 guys to be very helpful, between the two of them there isn't a problem they can't solve.
shyflirt1
BikemanforU
With my new crank puller in hand that I picked up at MEC for $21 I easily got off the crank arms followed by the lock ring and adjustable cup but the fix cup was well rusted in place. I sprayed Liquid Wrench and PB BLASTER and let soak over night but the other problem was I needed a fix cup wrench. 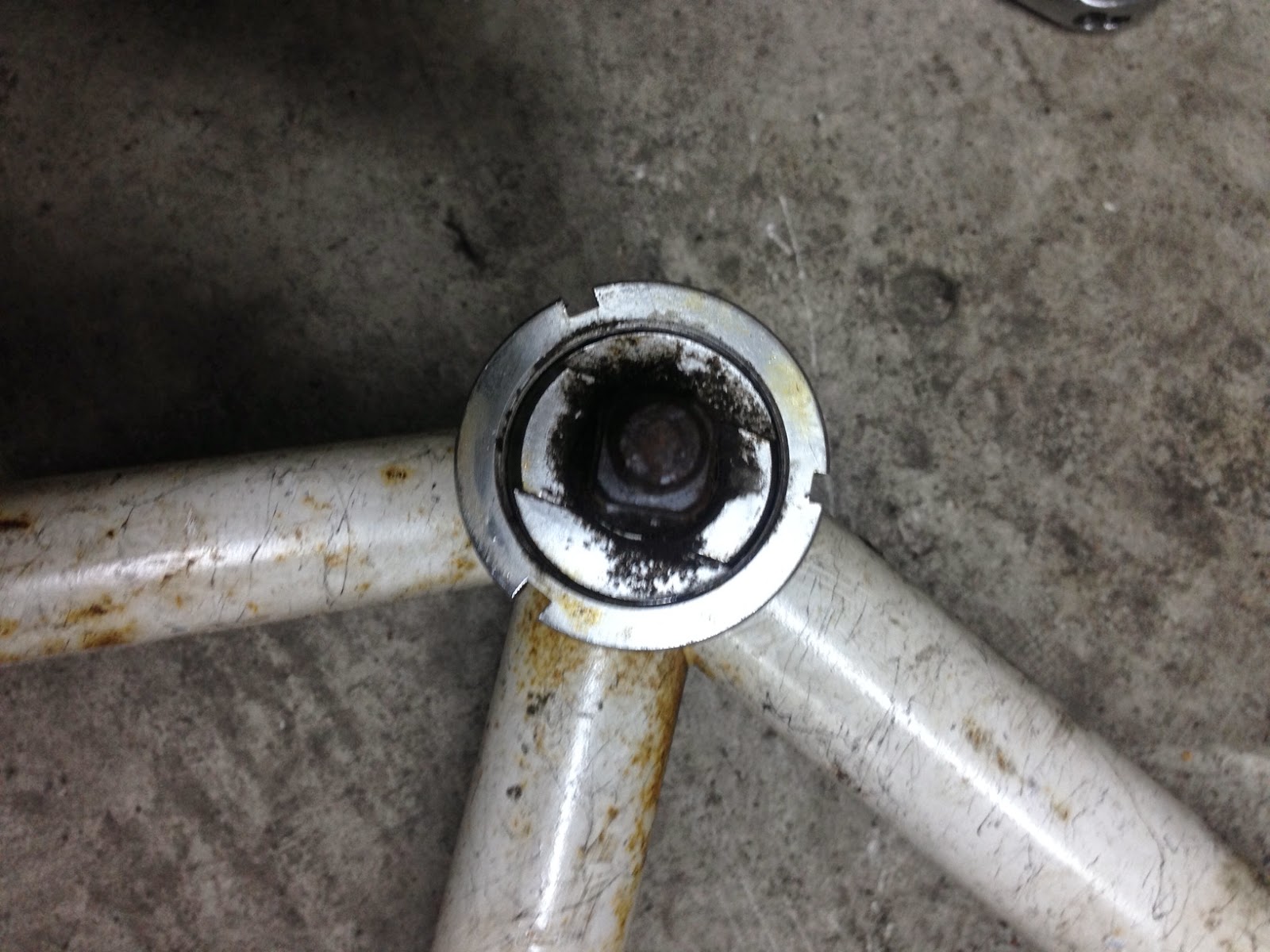 Rather then buying yet another tool I decided to visit one of the local DIY community bike shops to see if they could help me remove the stuck fixed cup. Sure enough the team at Bike Pirates - were amazing, very knowledgeable not only did they have the wrench, they also had a tool which held the wrench in place since there is only a 1/4 inch surface area to grab onto. We then added a pipe over the end of the wrench to provide more torque. After a couple of hard pulls on the pipe off came the fixed cup.

Once all the parts have been removed its time to strip the frame.

Heirloom Heavy Body Paint and Varnish Remover the Gelled Formula works best, simply follow the instruction and with a wire brush you can easily brush away most of the paint. A couple of applications, a bit of sanding and a final wash, your frame will be ready for painting. 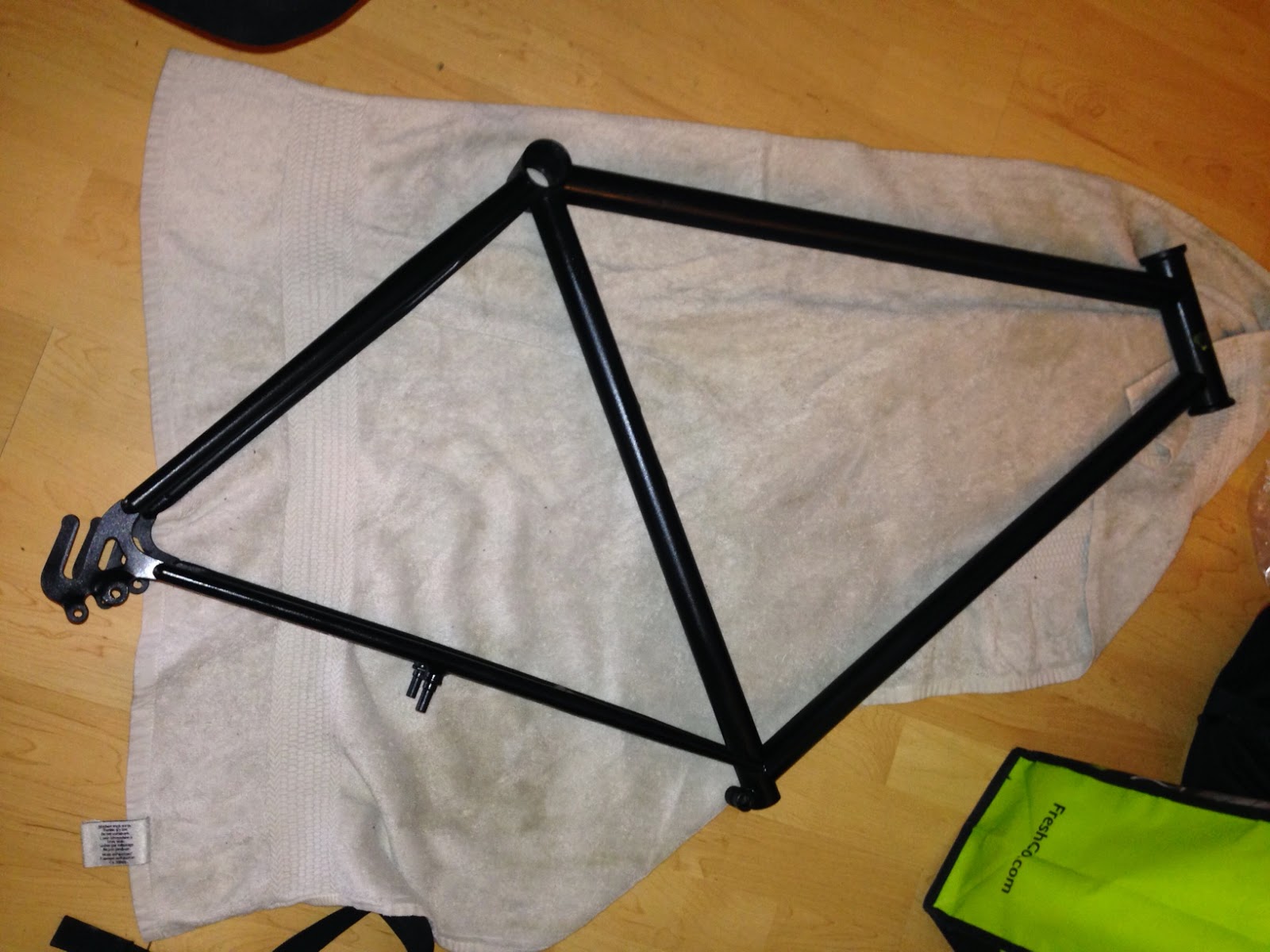 For steel frames I like to use an adhesive promoter primer then followed by an Enamel based paint I find enamel paint adheres better but keep in mind it takes a few days to fully dry. Once dry I apply Dupli Color Protective Clear Coat Finish, I find the Automotive clear coat has a nicer finish worth spending the extra money. 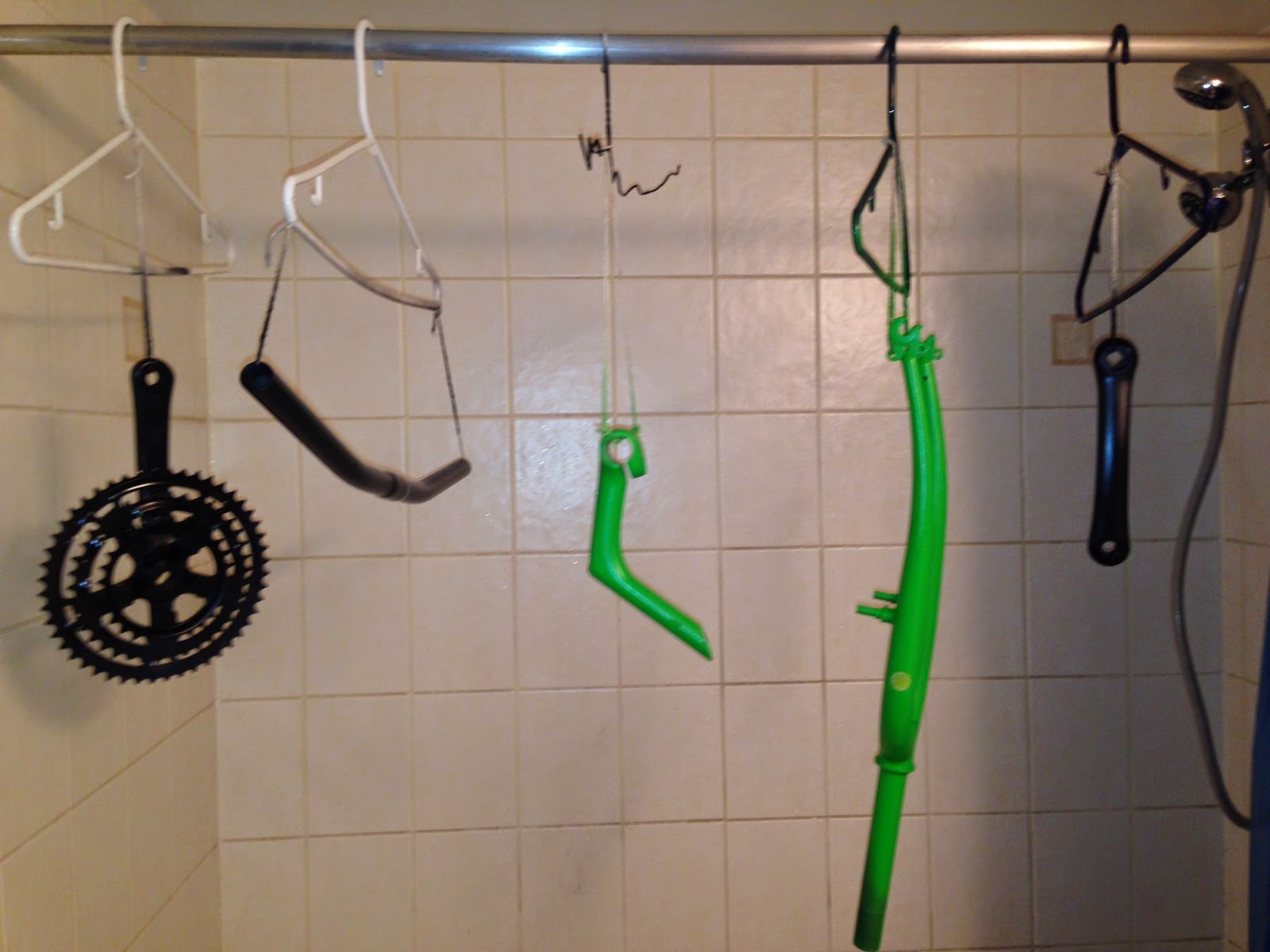 For aluminum frames and parts I use a different primer, I find that Galvanized Metal Primer works best any other primer will just chip off aluminum.

Now that all the parts are painted and dried, it was time to reassemble the bike. 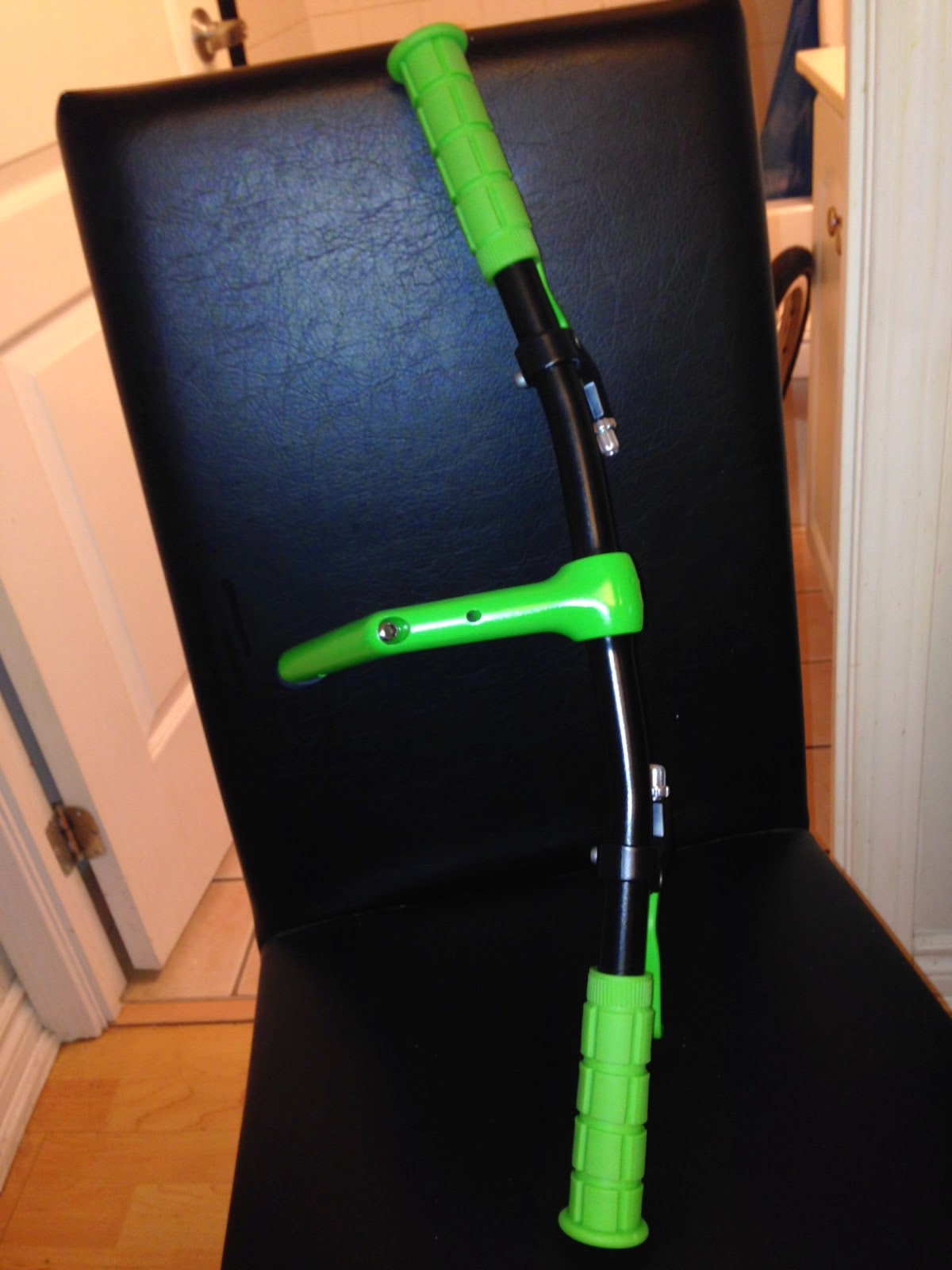 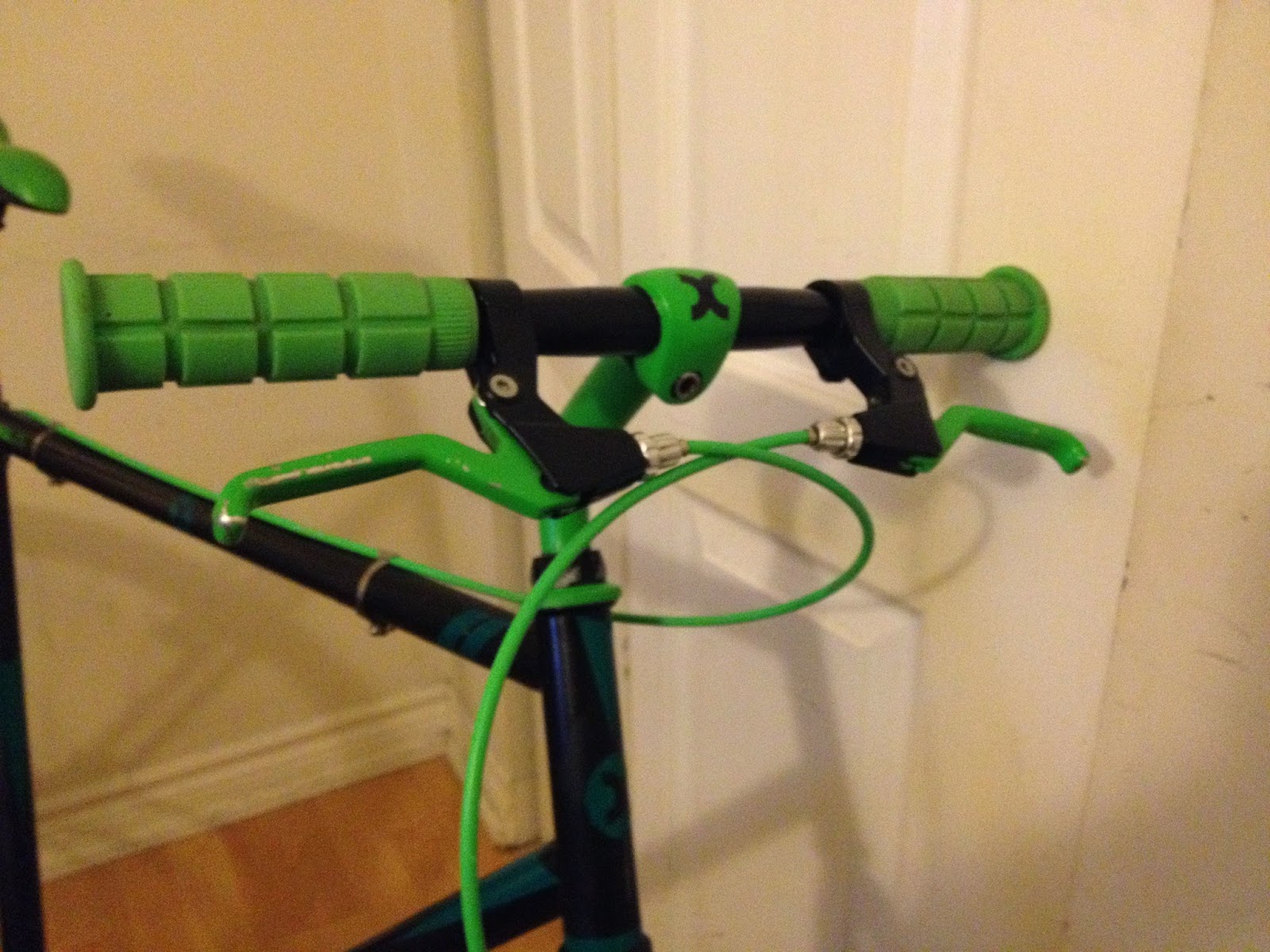 The original bike had a Freehub rear wheel thankfully, since the single gear converstion kits only work on Freehubs. 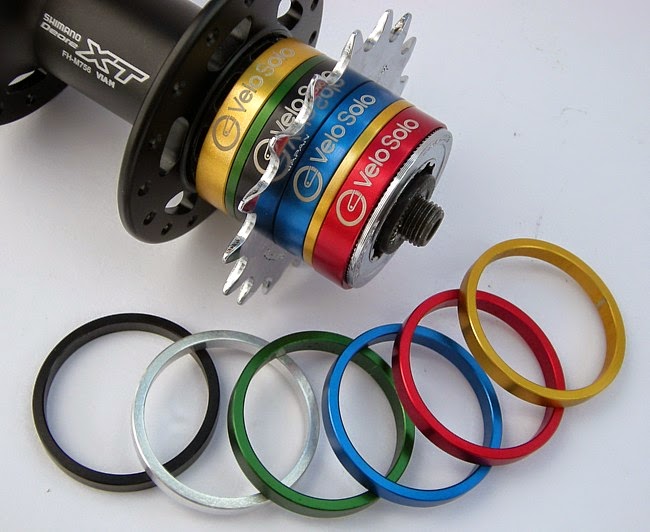 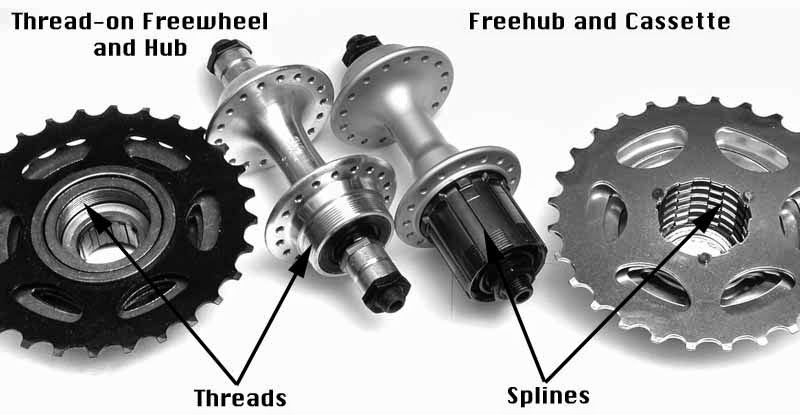 Once you've removed the cassette you'll need to play around with the spacers to ensure the Cog is aligned with the crank (this is extremely important and can cause damage to your bike or injure yourself if not aligned correctly). I used a long straight stick and ran it flush along the side of the crank all the way to the rear hub. I then used the spacers to align the cog to the stick giving me a straight line back to the crank. 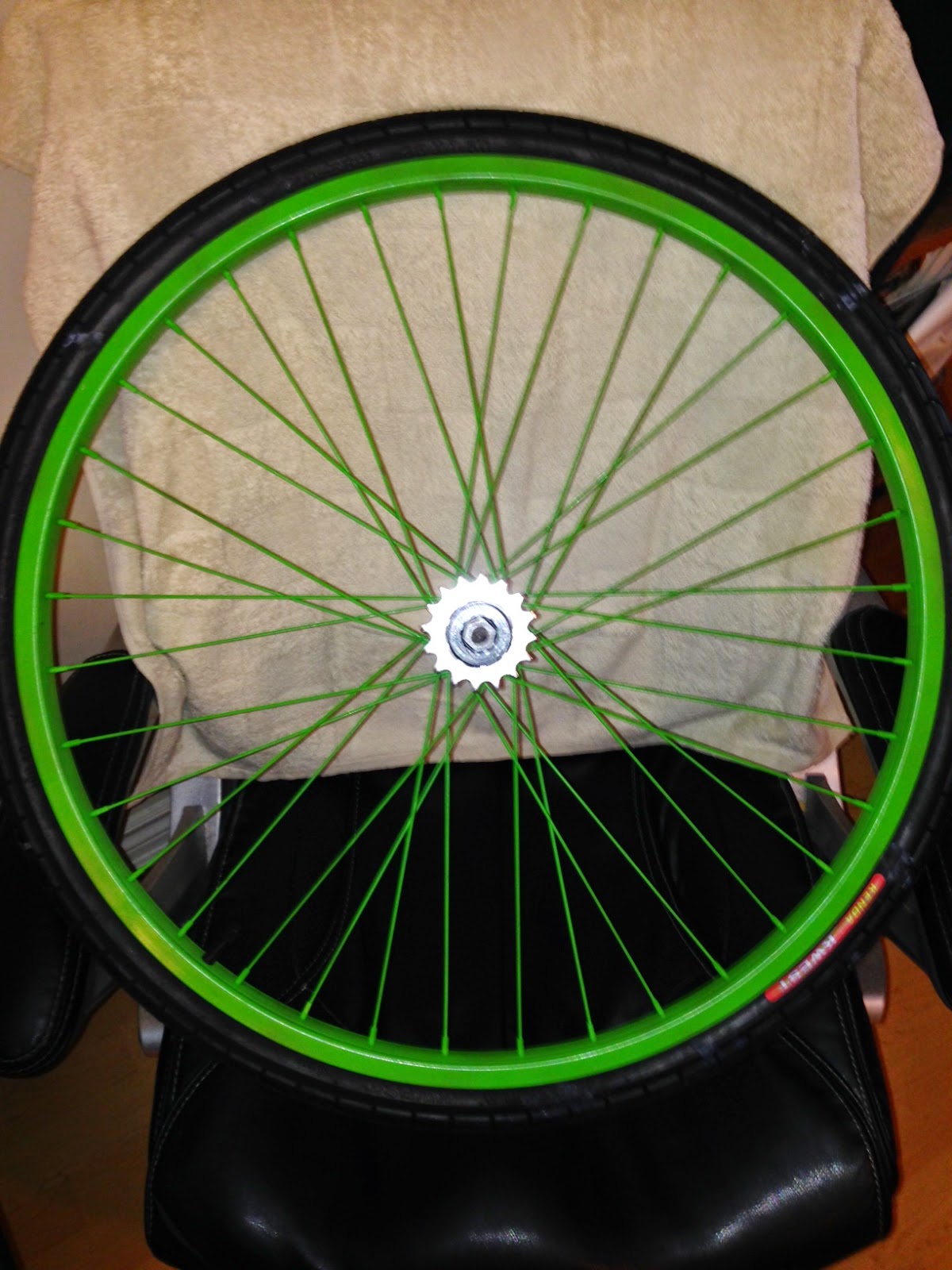 I love the look of painted spokes I find it ties the look of the bike together. Just make sure you don't make the same mistake I did and paint the braking surface you're going to want to tape off this area. The spokes and inner rim are fine to paint just make sure you remove the axel and bearings and tape off the hub so that no paint gets inside.

Once the cog is aligned to the crank its time to attach the chain. I bought a KHS green chain from Uncle Jacobs for $10, that was $5 less then other stores.
You'll need your chain remover tool to adjust the chain to the correct size both Fixed and Single gear bikes require quiet a bit of tension.(tip: when pushing out the pin from the chain make sure you don't push it out completely, just enough to remove the link, this will make it a lot easier when it comes time to reattaching the link.

So heres my first Single Speed Mountain bike, I like to call it... THE HULK! 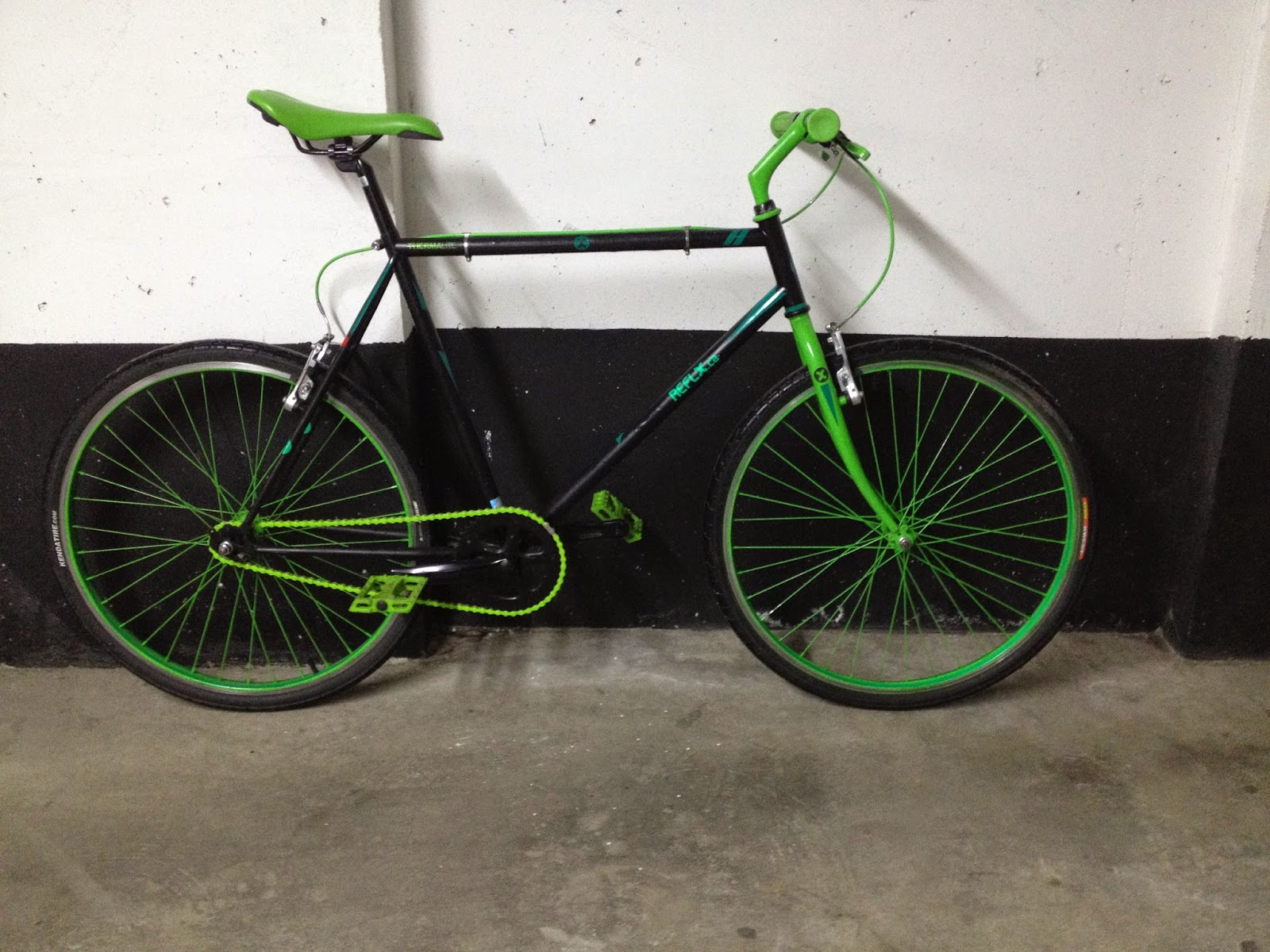 As you may notice no cheap plastic reflectors any where on the bike. At sunset, a front white light along with side and a back reflector are required by law, but to ride safe and Be Seen at night, REFLX Reflective Wheel Strips and REFLX Reflective Decals will keep you visible to near by motorists www.reflx.ca. 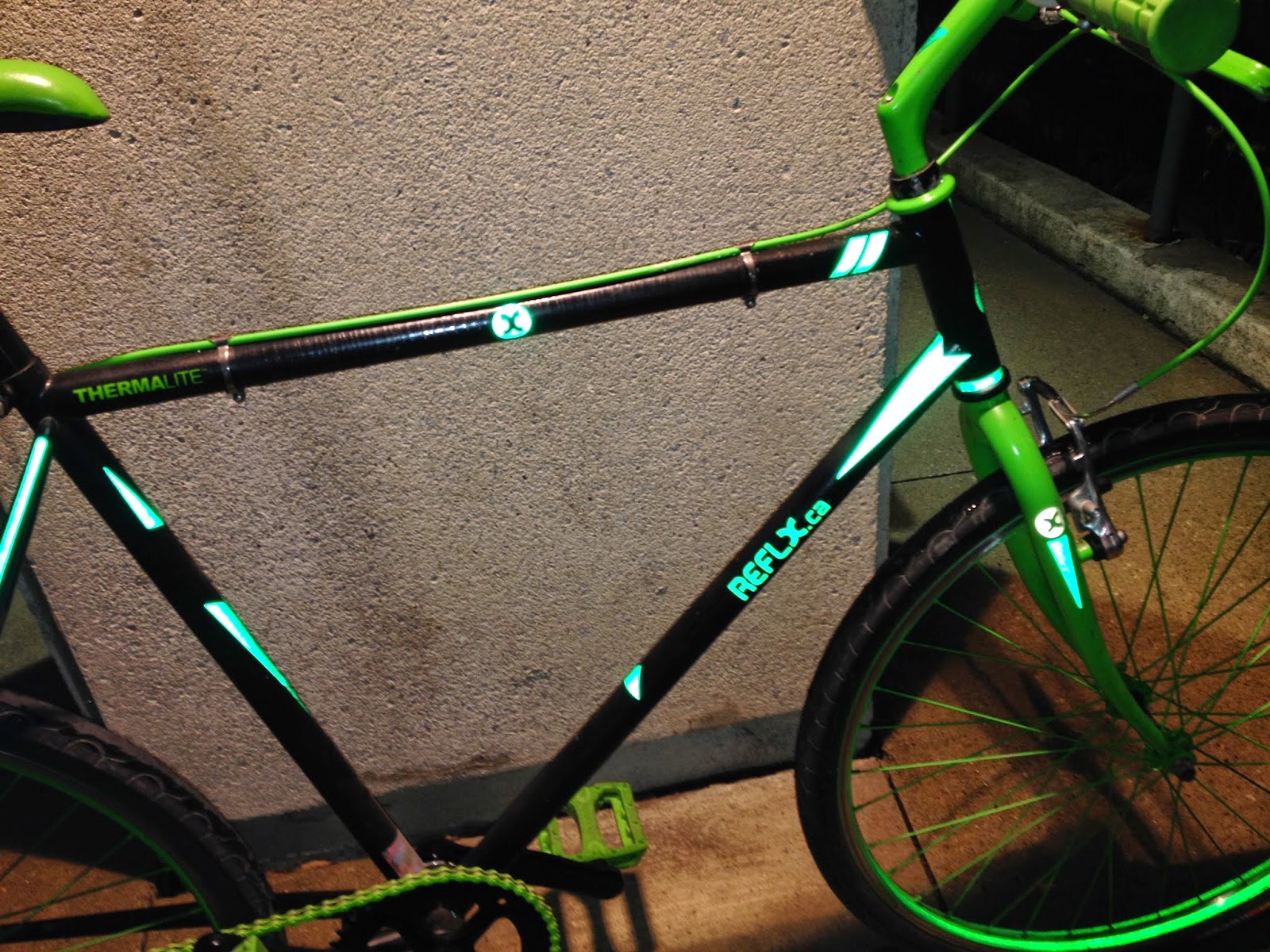 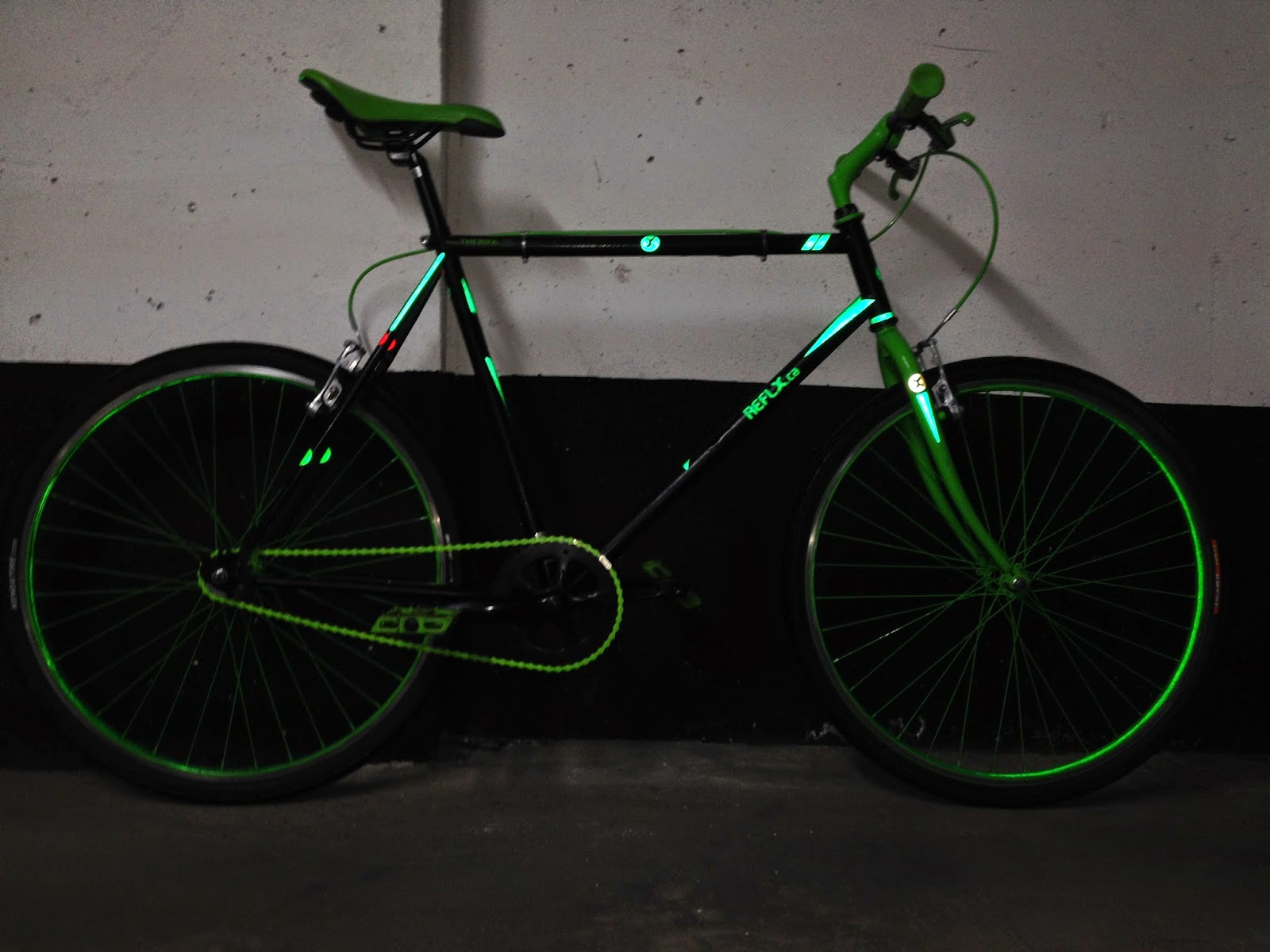